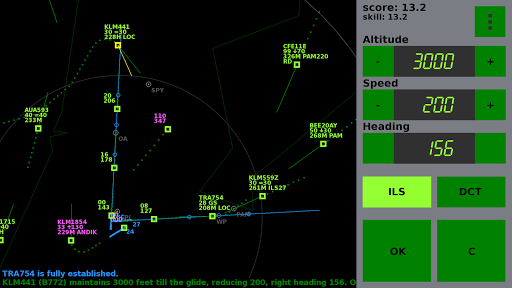 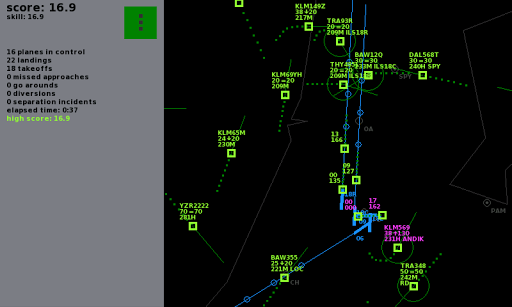 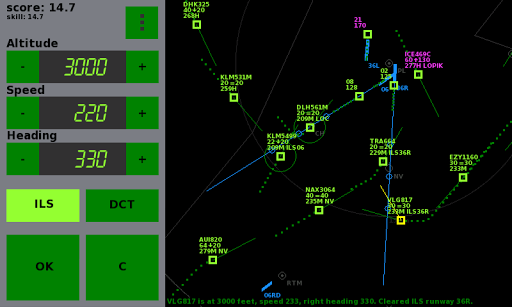 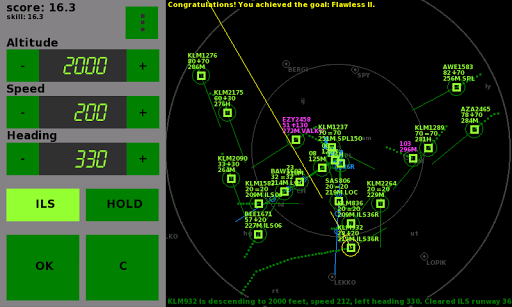 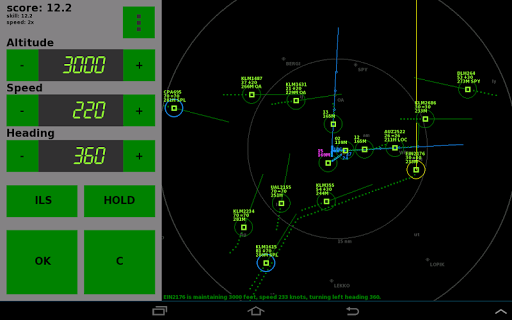 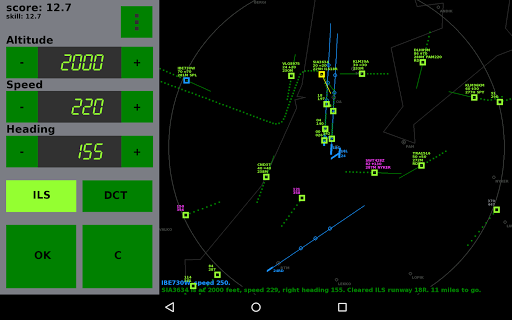 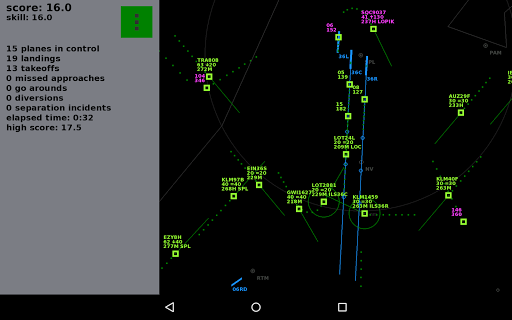 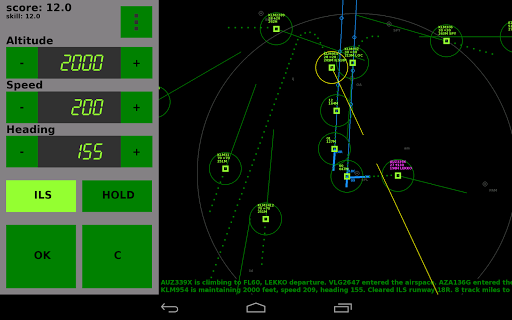 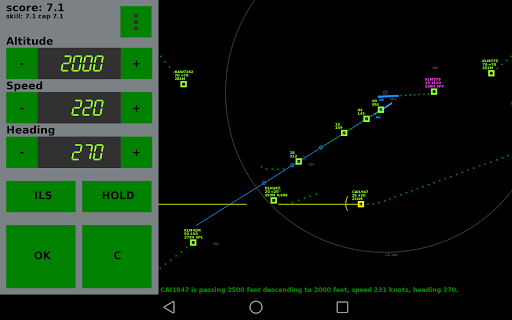 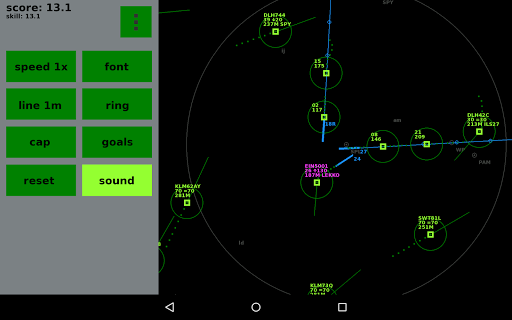 In this simulation game, you are an air traffic controller at the approach radar of a busy airport. The goal is to guide the planes safely to the ILS (Instrument Landing System) of the runways to get a high score. If you make no errors, the number of planes you have to control gets larger and larger. How many flights at a time can you handle?

A warning for users who are unfamiliar with aviation: due to high realism, this game may bore or frustrate you, so please read the instructions below first. In-game there’s only a little bit of help, and the game is in English only.

The game shows you a radar screen with planes and runways. Planes are generated randomly. To keep it fun and playable, this ATC sim is a bit simplified compared to real life, but it’s all on scale and the planes behave realistically.

Instructions
Select a plane, give it a descend instruction (to about 2000 feet), guide it to the thin blue line at a large distance from the runway, and clear it for approach by enabling ILS mode, which means it will follow the line to the runway (given that the plane captures the line at a shallow angle). It’s also handy to check out the screenshots and the video. Then just try it! More detailed instructions:

• sequence the traffic to the ILS path in front of a landing runway. The runway is depicted as a blue line with a number; the ILS path is the thin blue line extending from the runway. In order to capture this ILS beam, a plane must comply to three conditions:
(1) the ILS mode of the plane is activated,
(2) the plane is descended low enough to intercept the glideslope from below; the blue circles mark the altitudes of 2000, 3000 and 4000 feet,
(3) the plane must intercept the ILS at a heading of 50 degrees or less with respect to the runway (aim for about 30 degrees).
If captured correctly, it will follow the line and land automatically on the runway. Note that it takes some time for a plane to descend to the selected altitude. When a plane is fully established, it will be handed over the the tower and then you score skill points. For parallel approaches, maintain 1000 feet vertical separation until both planes are localizer established.
• Departing aircraft determine their heading and speed themselves; they only require an instruction (when it’s safe) to climb to a higher altitude: flight level 130.
• You can also lose skill points when planes:
(1) fly too close to eachother (generally: overlapping circles and altitude difference <1000 feet),
(2) leave the airspace (outer grey circle), also if they are departures but leave the airspace at or below FL90,
(3) missed approaches/go arounds.
• The amount of planes that you have to control is about the same as the amount of skill points you have: the higher the skill value, the more planes you have to deal with. You can also achieve ‘goals’ by landing a certain amount of planes in the correct way.
• Some planes have an additional ‘RD’ tag; only these planes need to land on the secondary ‘RD’ airport.

In the menu there are options like a speed multiplier, and custom traffic for a more relaxed gameplay. Set sound mode to 2 or 3 for pilot speech via android TTS (uses US and UK language).

The game plays best on big screens. If you have feedback, please send me an email.
v4.2.8: small adjustments: planes about to divert make the warning call closer to the boundary, reduced the chance of unwanted triggering of doubletap zoom, swiping a heading from a holding plane now makes it leave the pattern via the fix, more hints for new players.