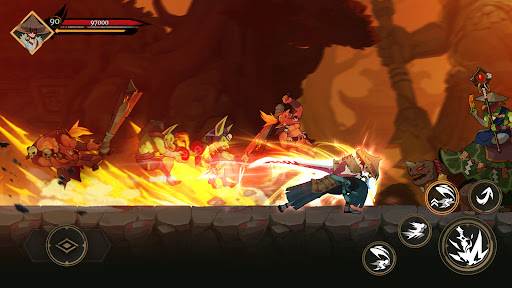 An adventurous journey of the true great twins from a mysterious village that has a thousand year history of fighting demon. Emerge yourself in the ancient Japanese world where there are magic, monsters, heroes you only can hear from fairy tales.

▶ Asano and Yuri are the twins you will be role-playing in the game, they got their power under the great sensei Akita Shigeuji’s teaching, without fear or any hesitation now they are on their way to get revenge on the tyrant Shinigomu who is responsible for the death their parent.

▶ How to play
– Players will receive daily quests and challenge quests in Hunter Clans
– Then the player will go outside the castle by the portal to do the quest
– Players will fight the legions of demon lord Kisumura, Must kill all the demons there to complete the quest
– When the player completes the mission, the reward will be experience points to level up the hunter, resources to make clothes, weapons, …